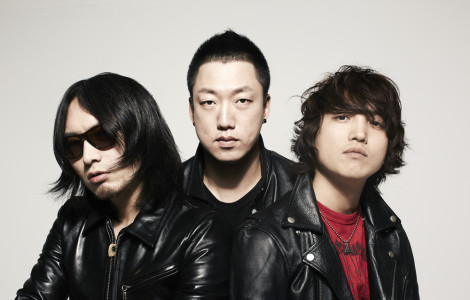 Decked out in leather jackets and Misfits T-shirts, renegade rockers Galaxy Express formed in 2006 and quickly began turning heads with their infectious blend of tightly wound garage rock, punk, and psychedelic sounds and explosive performances. The Seoul trio’s scorching debut was a double album called “Noise on Fire” that won Best Rock Album at the 2009 Korean Music Awards. Their “Wild Days” sophomore offering – an album that was written, recorded, and released all in the span of one month –earned the group the Musician of the Year prize at the 2011 Korean Music Awards. In November 2012, they issued their third long player, a self-titled effort that’s brimming with more of the raucous rock ‘n’ roll that has established Galaxy Express as one of Asia’s top-tier indie bands. Galaxy Express have floored audiences during gigs in the United States, Canada, England, Wales, France, Japan, Hong Kong, and Taiwan causing MTV Iggy to proclaim, “With their amped energy and stage exhibitionism, they’re the best live act to come out of Korea since…well, maybe ever.”