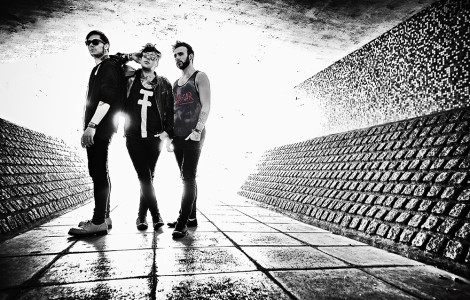 These Reigning Days are undoubtedly one of the best of the new breed of rock bands to emerge in 2014. Their striking live sound has been honed across 2 years of solid touring in Europe and the US.  They have played to packed stadiums and on festival stages in front of hundreds of thousands and their singles have topped the charts in Europe.

Their debut album “Opera of Love” is released this September at the same time as the epic single of the same name. These Reigning Days music is often described as anthemic, epic stadium rock. It fuses layers of strong but understated guitar lines with a twisting, indie-pop synth sound that quietly drives the compositions. Drawing on a great range of influences their songs, penned by Dan Steer, are memorable, danceable and instantly accessible whilst still retaining much depth for those who want to glean more. Dan’s stunning unique and powerful vocals and soaring guitar are underpinned with a pulsing rhythm section from drum phenomenpn Joe Sansome and formidable bassist Jonny Finnis.